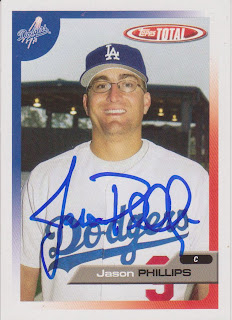 Here is a card that I got signed at a Royals game in 2012. Jason is the bullpen catcher for the Mariners and I was able to get this card signed after catching a bullpen session for Jason Vargas. I got the card signed by the dugout instead of the bullpen as both players were walking back to the clubhouse. Since it was Jason Vargas and Jason Phillips, I just yelled out for Jason since I wanted sigs from both of them. Both of them ignored my call, so I switched it up to Mr. Phillips since I figured I had a better shot at him over Vargas. It worked out and he came over and signed my two cards. He told me that they both heard me shout out Jason, but they weren't sure which one I meant. I wonder if Vargas would have actually came over it I shouted out Mr. Vargas instead of Phillips. Oh well. It was a slow day of 'graphing and I went with the safe bet since I had gotten Jason the previous season.

Jason's tenure with the Dodgers lasted just one season. He played in 121 games that season and he hit .238 with 10 home runs and 55 RBI. The Dodgers let him walk after the season and he joined Toronto for the 2006 season.

It is not too often that I get a card signed in blue Sharpie and wish that I had used black. But, this is one of those cards. He signed right over the Dodgers script on his jersey and it is a little tougher to make out the signature.

I posted the two cards that Jason signed for me in 2011 later that season. In one of the posts, I commented on Jason's eyewear that he was somewhat known for. He must have ditched those things when he got to LA and busted out these specs instead. I like the others much better, though.