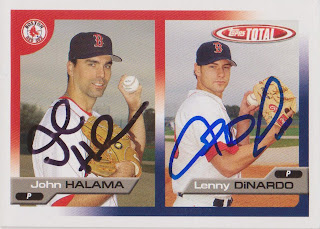 Here is a card that I originally posted on here in 2010. That was about a year after I got Lenny DiNardo to sign the card while he was with the Royals. That card sat in my binder for three years before I decided to send it to John Halama to get completed. So, in late August 2012, I sent this card to him, care of the Atlantic League's Lancaster Barnstormers, with about two weeks left in their season. I started to think the card was a goner, but it eventually made it back home in the last week of October. And, as always, I am thrilled with the results. These puppies just do not look the same with only one signature on them. Just look at yesterday's post for proof of that.

John pitched in the Majors for nine seasons with seven clubs- the Astros, Mariners, A's, Devil Rays, Red Sox, Nationals, and Orioles. He played a season or less with all of those teams except the Mariners. With them, he logged four seasons and had three straight with double digit wins, including a career high of 14 in 2000. With Seattle, John was 41-31 with a 4.46 ERA. For his entire career, he was 56-48 with a 4.65 ERA.

John last appeared in the Majors in 2006. He joined the Atlantic League in 2007 and pitched there through 2012 with a few stops in AAA and Mexico. 2012 was his last season playing ball. Why I decided to wait until two weeks before John's career ended to write to him, I cannot explain. But, I am glad that I did it and did not wait a day later.

So far, this is the only TTM attempt that I have sent out to an independent league team.
at 11:41 PM

That card looks great completed - I'd forgotten Halama was in the Red Sox system at one point. I mostly think of him with the Long Island Ducks and the Seattle Mariners.

My favorite TTM moment involves this card. I sent it to Lenny DiNardo in 2013 when he was a member of the Barnstormers for a TTM project I'm working on. When I received my SASE in the mail, the words "Mr. Halama signed too - Len" were written on the bottom. Sure enough, the card was not only signed by Lenny, but also by John, who was the pitching coach of the York Revolution at the time. I checked Barnstormers' schedule, and they played the Revolution the weekend before I received the return. So basically Lenny signed my card, realized that he could get John to sign it too, brought my card over to him to sign, and then took the time to write me a note.

Very cool story Steve. It is pretty special when something like that happens.