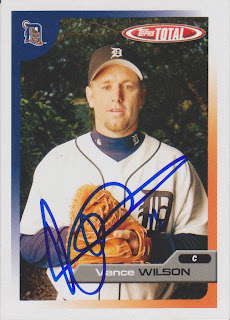 Here is the first card in what is going to amount to about a week's worth of posts from 2005 Topps Total. I have said it before and I will say it again. I really miss Topps Total. That is mostly because I am an autograph collector and the new sets have really lost focus on cards of the back-up catchers and relief pitchers. Those are the guys that I go after at most Royals game that I 'graph because I mostly attend Sunday games when batting practice does not take place.

So here is a card of Vance Wilson that I got signed at Spring Training in 2013. Vance was the Royals high-A manager that season and I was able to get this card signed after the minor leaguers worked out the day that I was there. The Royals Spring Training set-up is excellent for 'graphing the minor league side. The Major Leaguers can completely avoid the fans, but the guys in the minors have to walk by them to leave the complex. And, to make 'graphing so much easier, the Royals minor leaguers have their names on the back of their jersey to make them easier to identify. That was how I was able to get this card signed. Vance walked right by me and I had no clue who he was. I turned around to see "WILSON" sprawled across the back of the jersey and I yelled out "Vance" just in case it happened to be a different Wilson. It wasn't and he turned around and signed this lone card for me.

I wish all of the teams had their minor league players wear their names on the back of the jerseys. It was a pain in the ass when I 'graphed the Dodger's minor league complex and I didn't even bother with the Rockies.

For some reason, this was the only card I of Vance that I could come up with for that trip. He has a few cards out but they are mostly from the years I was in college and not collecting cards. He is currently the manager of the Royals AA team in Springdale, Arkansas. A buddy and I are thinking about making a little road trip down there this year, so I will need to acquire a few more cards of him before that trip comes.
at 8:29 AM