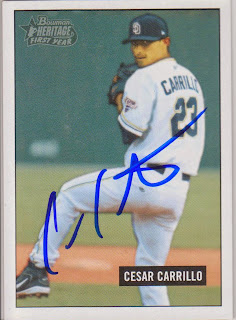 Here is a card of Cesar Carrillo that I got signed at a Wichita Wingnut playoff game last season. Cesar was playing for the Laredo Lemurs and he signed the card prior to game three in the first round series.

I posted a card of Cesar about four years ago and that card can be seen here. That card is from the same set as this one and even has the same number. I am not sure if one is a variation or if it is just Topps being Topps. I am tending to lean toward the second option.

Since then, it has been a steady diet of minor league hitters. He pitched in the Astros and Tigers systems for a couple of years. He spent the past two seasons in the independent leagues, one in the Atlantic League and last year in the American Association. He did really well with the Lemurs last season by posting a 8-5 record with a 2.80 ERA. His ERA was the lowest mark that he had ever recorded in his professional career. Plus, he pitched his first, and only, shutout with Laredo.

I have no clue what is on tap for Cesar this year. Laredo does not have the most up to date website, so I am not sure if he will be back with them or not.
at 8:03 PM