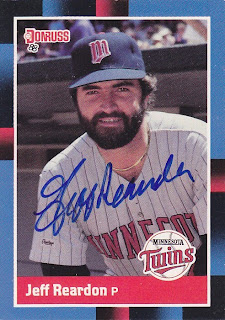 This is the second card that I included when I sent Jeff his '81 Donruss card. I figured that Jeff isn't really remembered as a Met, so I had better send a card of him on a team that he is remembered for. I already had an Expos card signed by him, so a Twins card was my best option.

Jeff finished his career with 367 saves and was the all-time saves leader after breaking Rollie Fingers mark of 341. He has been passed a few times since then and he is currently in seventh place on the all-time list. He saved over 40 games three times (and with three different teams) and he was an All Star four times. He won one championship with the '87 Twins.

Jeff has been a very good TTM signer over the years, even while dealing with some personal issues. He always signed for free, but he included a note with my return stating that he would appreciate donations to his sons's memorial fund on future autograph requests. So, keep that in mind if you are looking to add him to your collection through the mail.
at 11:36 AM

That's a great looking autograph. I love the beard.