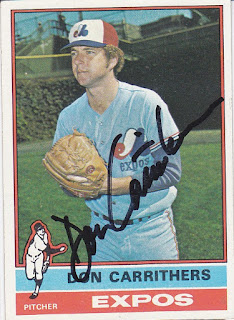 This is the lone '76 Topps card that I unlocked in the Topps Diamond Giveaway. It feature Don Carrithers, a pitcher for the Expos. I sent this card to Don at the end of April last year and I got it back a month and a half later.

Don pitched in the Majors for seven seasons in the '70s. He spent time with the Giants, Expos, and Twins. He was mostly used in relief, but he did start over a third of the games he appeared in. For his career, Don was 28-32 with 3 saves and a 4.45 ERA.

Nothing in Don's year to year stats really stands out to me. The most wins he ever recorded in a season was six in 1976. But, that was also the same year that he took the most losses with twelve. About the only thing that really stands out is that in 1975, Don finished five of the fourteen games that he started, hurling two shutouts in the process. He also finished seventh in the league that season with seven hit batsmen.

Don pitched in one post-season game with the Giants in 1971 and did not fare so well. He faced three batters and all three got a hit and scored. So, Don's career post-season ERA in infinite.

Only one more day until 2013 Topps comes out. For once, I really like the look of the set and I am actually looking forward to ripping some packs.
at 9:49 AM