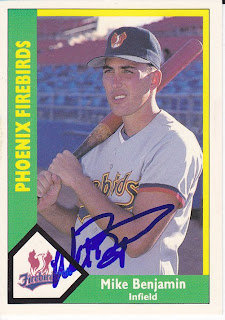 Here is a card that I got signed last Friday in Omaha. Mike is a first year assistant coach for Arizona State and I was able to get this card signed after they practiced at Rosenblatt that day.

After each team's practice session, they all sit down on the concourse and sign autographs for a half hour or so. I was hoping to get Mike's autograph then, but he was nowhere to be seen. I looked around in the stands to see if he might have been watching Clemson practice, but I didn't find him. I went back to the autograph line and found a team trainer and asked him if he knew where Mike was. He told me that Mike was in the dugout watching Clemson practice. So, I went down there and I still couldn't find him. I looked around a bit more before I headed back to the autograph line. When I got there, I found Mike grabbing his stuff to head to the bus. That is when I got him to sign.

While I was trying to find Mike, I found a kid that had already got some cards signed by him. He told me to just look for the guy in the ASU uniform with some nice-looking pork-chop sideburns. You can't miss him, he said. Sure enough, that was how I found him. He was probably the only guy in town sporting them that weekend. Even the head coach mentioned the 'chops while he was signing my two cards, but I will save that story for the next one.

I've had similar experiences trying to find players or coaches.

Too bad you weren't able to get more cards signed over the weekend.