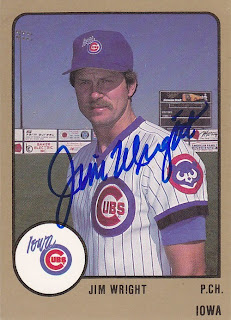 Here is a card that I got signed on the day of the '85 Classic. I got to the game early to attend a tailgate party. But when I found out that the party was on the opposite side of Arrowhead Stadium and that the players were still arriving for the game, I opted to stay by Kauffman to get some autographs. That is how I got this card signed. Jim is the bullpen coach for the Rockies and he was nice enough to sign for everyone that wanted his autograph. The only two cards that I had of him were minor league cards, so I was surprised to see so many people wanting his autograph. It looked like most of the people had his '82 Topps card that Beckett lists as an error because it has a picture of a different Jim Wright. But Jim signed those cards nonetheless.

I've had this Iowa Cubs teamset for almost twenty years and I had forgot about it until I found it in a binder last year. Some notable names in the set include Mark Grace and Bob Tewksbury.

I have no idea who the I-Cubs could be honoring with the black armband. Any ideas?

I wonder what Fleer thought about this set.

The Iowa Cubs are still around today and they are still the AAA affiliate of the Chicago Cubs. They play in the same ballpark that this photo was taken in, but you couldn't tell if you went there today because of massive renovations.
at 6:58 PM

I have an Omaha Royals team set from 1994 that is made by Procards. It is touted as "Fleer Procards." So maybe they were already in cahoots in '88? Not sure.

I like the cross between Fleer design / Bowman pose / minor league theme thing going on. Plus it's a nice signature. Nice work on this as always. Haven't been commenting a lot recently but have been digging the cards.

Thanks a lot, Dave. Nice job on the Fleer/Procards connection, too. I hadn't thought of that.