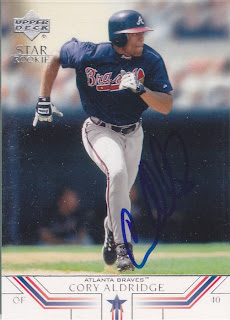 I had no idea that Cory Aldridge played in the Major Leagues until about ten minutes ago. I was looking at the two cards that are signed from this set and I noticed that one said "Future Gem" and the other said "Star Rookie". Having assumed that niether player played in the Majors, I started to wonder what the difference was between the two. Well, it seems that Cory's five Major League at-bats are the difference.

Cory was drafted by the Braves in the fourth round of the 1997 draft. It took him five seasons to reach AA and he ended up hitting .246 there with 19 home runs and 56 RBI. The Braves organization was pleased enough with those results that they gave him a September call-up. During that month, Cory got into 8 games. He was mostly a defensive replacement, but he did get 5 at-bats. In those 5 ABs, he struck out 4 times and grounded out once.

That was in 2001 and Cory hasn't recieved a second chance to redeem himself since. It looks like he was hurt for most of the 2002 season since he only played in 17 games for the Braves GCL team. Since then, he has bounced around the Royals, Mets, White Sox, and Angels systems, as well as a brief stint with the Newark Bears. He is currently playing for the Angels AAA team, the Salt Lake Bees. He is off to a good start so far with a batting average over .300 with 5 homers and 23 RBI. It would be nice to see him get another shot at the Majors.

I got this card signed last season in Des Moines, Iowa while Cory was playing for the Omaha Royals. It's not the best card for getting signed, but it was the only one I could find on checkoutmycards.com. Cory signed it between games of a doubleheader.
at 5:11 PM

It would be nice for him to get another shot to at least get a hit and get rid of that .000 average!