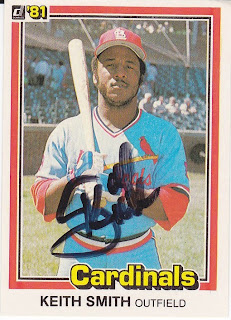 Here is one of the three '81 Donruss cards that I got back in the mail on Thursday. Unfortunately, I forgot to write down when I sent this card out, so I don't really know how long it took to get back home. I know I sent it out sometime this month, so it didn't take too long.

Keith had a short Major League career that lasted 53 games over three seasons with two teams. He is a career .207 hitter with three home runs and 8 RBI. He only appeared in 24 games in 1981, so I guess he is lucky to even have a card. Fleer also made a card of him that year, but Topps did not.

It's kind of hard to make out Keith's signature. The only thing I can make out is an overlapping "K" and "S". After that, it just looks like some scribbles.

On a side note, I went to a Royals game yesterday and I raked in the autographs. They had an old-timers softball game before the game featuring players from the '85 Cardinals against some '85 Royals. I went to the old-timers game last year and I nearly got shut out on autographs. Because of that, I really wasn't looking forward to this year's game and wasn't even planning on going to it until two weeks ago. Luckily, I changed my mind and I came home with 49 autographed cards! I got signatures from 23 different players. 7 (players, not cards) were from the '85 Cardinals, 2 were from the '85 Royals, and the rest were from Rockies players and coaches. I was even able to upgrade my '81 Donruss card of Don Baylor that got smeared on my TTM attempt. If anyone would like that card, let me know. 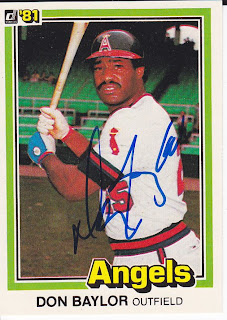 At least I don't feel bad for not remembering Mr. Smith.

I'm glad you had a good time at the Royals game.

I love that you're getting autographs of some of these no-name '81 Donruss guys. They mean nothing to a lot of people, but I collected this set as a teenager and it was cool seeing guys like Smith and others who would appear in Donruss but not in Topps.

Congrats on the success at the Royals game. It's always great to get that many autos at a game!