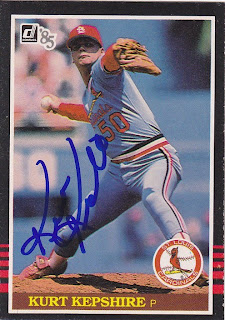 Here is yet another card that I got signed at the '85 Classic (this is going to be a reoccurring theme over the next week or two). I could only find two cards of Kurt, but like every other formal Cardinal that day, he signed them all.

Out of all the guys that played for the Cards in the Classic, Kurt had the shortest Major League playing career. He pitched in 51 games, all with the Cardinals, over a three year span. 1985 was the year where he got the most work and he appeared in 32 games that season (three were starts) and he posted a 10-9 record with a 4.75 ERA in 153.1 innings of work. He walked 71 that year while striking out only 67. He did not get into any of the Cardinals post season games that season.

Kurt only appeared in two games for St. Louis in 1986 while he spent most of the season playing AAA. He missed the 1987 season, but he pitched at the AAA level in 1988 and 1989 before calling it a career.

Check back later today for a contest.
at 1:36 PM