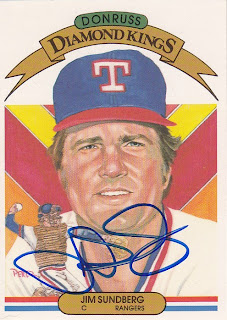 Twelve days ago, I posted an '81 Donruss that was signed by Jim. I had sent that to him since I didn't figure I would be able to get his autograph at the '85 Classic. It turns out that that assumption was wrong since I got this card signed by Jim at the game last week.

When the gates opened up to the ballpark that day, I went straight down to the Royals dugout since that is where everyone warmed up last year. Jim Sundberg was one of the first players to come out of the clubhouse and I was able to get him to sign before he even got out of the dugout. He signed both of my cards and signed for other people, as well. About that time, the Cardinals started to take the field and they all went over to the visiting teams dugout. So, I switched to that side so I could focus on getting some autographs from them.

This is now my oldest signed Diamond king. For a minute, I even thought that this was an '82 since that is what the copyright date said. But, I double checked and it is an '83, the second year that Diamond Kings were made.
at 4:53 PM

That's nice. I tried to get Jim and Mark McLemore at the Rangers post-game show a few weeks ago, but security ran us off.