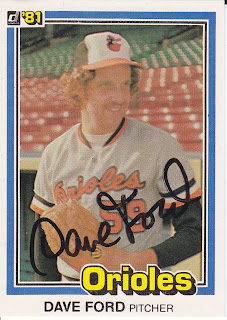 Here is a card that came in the mail yesterday. I sent this card to Dave on the eleventh, so it took a whopping six days for this card to go to Cleveland and back. That's not too shabby.

As, for Dave, I know nothing about him. Luckily, this card has this bit of info on the back in the career highlights section- "1980- Saw the least amount of work of any Oriole pitcher, but pitched the first complete game of his big league career and also chalked up a save." So, that is good to know.

Dave's Major League career lasted parts of four seasons with the O's and his 1980 season was the season that he appeared in the most games. He finished his Major League career with a 5-6 record in 51 games (8 starts) with 3 saves, and a 4.02 ERA. 1981 was his last season in the Majors, but he kept on playing in the minor leagues until 1985.