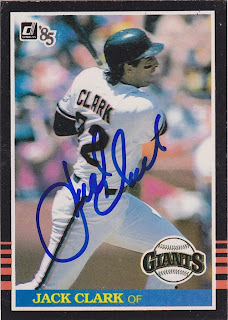 Here is the first of three cards that Jack Clark signed for me at the '85 Classic last week. Unlike John Tudor, I actually had an '81 Donruss card of Jack. But, the damned thing has a gigantic gum stain on the front of it. So that was a no-go.

When I got my cards signed by Jack, it was just me and another guy trying to get his autograph. Later on, Jack signed again for a larger crowd and I tried to get three cards signed for another guy there, but Jack only signed two of them. I don't know if he only signed two because it was me again or if he was just trying to get as many people as possible. It didn't matter and that guy was able to get his third card signed when the crowd had thinned out. I thought that it was pretty cool that Jack was adding "The Ripper" to his autograph on balls, 8x10s, and programs. I wish he would have added that to one of my cards.

In case you missed it a year and a half ago, I had posted a card of Jack as a Padre. You can see it here.

I learned at the game that Jack has been coaching the Springfield Sliders, a summer collegiate team in Springfield, Missouri, the past two years. He recently stepped down from that position and is now their general manager. But, there is still a picture of him on their websites banner.
at 12:09 PM

Nice autograph. I always have a hard time remembering that Clark played for anybody but the Cardinals & Yankees.