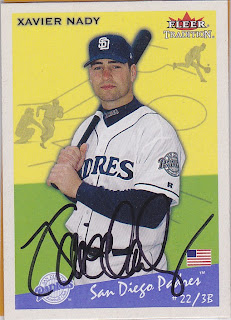 Here is a second Xavier Nady card that was given to me by Rod, of Padrographs. The first one was posted about a week ago. Rod sent me a few Padrograph doubles and for some reason, I kept both Nady cards and gave away the other doubles. Why I kept the two Nady cards, I do not know. Maybe I kept them because they were the only signed cards I had at the time by a player whose first name begins with an "X". I don't know.

I really like this Fleer Tradition set. It has a nice Goudey feel to it, even though Upper Deck's Goudey is still a few years away. I also like the post-9/11 American flag that they added to the front. That is a very nice touch. Overall, these are great looking cards that are perfect for atuographs. I just wish that I had more of them signed.
at 1:27 PM