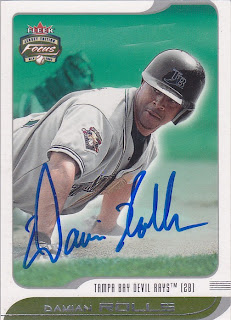 Here is a card that I got signed in Kansas City last summer. I got it at Community America Ballpark while Damian was playing for the Kansas City T-Bones of the Northern League. I got the card signed shortly after getting to the ballpark after Damian was talking with a group of people off of the concourse. I intercepted him when he was making his way to the clubhouse and he signed all three cards for me. Like Mitch Wylie, he was very talkative.

This makes the list as one of my favorite autographs. The reason for that is because Damian is the only Major League ballplayer that I have ever played against. We played one game against each other in the 1994 American Legion Kansas state tournament. I was supposed to play against him one other time in 1996, but he left his team after getting drafted.

For the game we did play, I do not remember him at all. In fact, I had no idea who he was until he got drafted and some of the guys on the team remembered him. The only thing I remembered was that we won the game and advanced to the finals. But, it is still fun to say that I played against Damian Rolls.

Damian retired from playing after last season and he is now the T-Bones hitting coach.
at 2:17 PM

Z, that is a GREAT story! Maybe the Devil Rays should have drafted you! That is by far my favorite card of Rolls ever. Its the only Rolls card in my team binder, I just really like it. It looks GREAT signed!

Thanks, Marck! I'm pretty happy with the way it turned out as well.