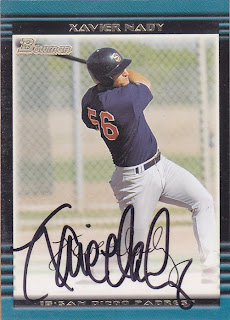 Here is the second of three 2002 Bowman cards. I think that it is odd that the first two cards were given to me by two different people on differents sides of the country (this one is from Rod of Padrographs) and yet the cards are numbered 425 and 426. What are the odds of that?

Like I said, this card is a Padrograph. It is also one of the few cards that have been posted on this blog of a current player. Trust me, as the cards get more and more current, so will the players. Tomorrow's card is of a current player as well, but don't expect one every day from here on out.

I'm sure just about everyone knows who Xavier Nady is, so I'm not going to rehash his playing career. For those of you who do not remember, he missed most of last year because he needed Tommy John surgery and he is currently on the Cubs roster.
at 1:01 PM

Cool autograph, it would have been nice if he hadn't signed over the pre-printed signature though!

Yeah, but at least his actual signature is much bigger than the fake one. I have some where you can't tell the two apart.