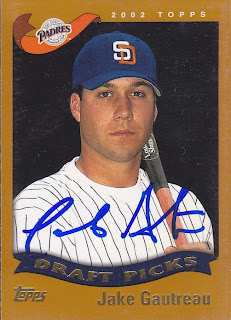 Here is another Padrograph from Rod. This one features a former Padre first round pick, Jake Gautreau.

Jake was an All-American at Tulane in 2001 before being drafted by the Padres with the 14th pick in the draft. He signed quickly and made his professional debut with the Eugene Emeralds shortly afterwards. He hit .309 for them before earning a late-season promotion to the AAA club. He went 2-7 for them to finish out his first pro season.

He spent the following season, 2002, playing for the Padres high-A team, Lake Elsinore. He hit .268 with them and was moved up to AA in 2003. He spent all of '03 with the Mobile Bay Bears and hit .242. He ended up repeating AA in 2004, but evetually got promoted up to AAA for 48 games where he hit .274. According to the Baseball Cube, he even got traded twice on the same day that year. On July 30th, he is listed as being traded to the Rangers and then traded back to the Padres. I do not know what to make of that. I wonder if the trade got voided because of an injury. Unfortunately, it doesn't list who he was traded for.

While that trade might have fallen through, the next one didn't. That off-season, Jake was traded to the Indians. He spent two seasons with them and he hit .253 the first season and .194 the second season (both with the Tribe's AAA club). He was then traded to the Mets early in the '07 season and he hit .226 with them in 62 games before getting released. It looks like 2008 was his last season playing ball and that year was spent with the Ft. Worth Cats of the American Association.
at 5:26 PM