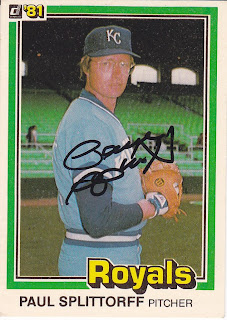 Here is the second and last card that I got signed at the game yesterday. I got this card signed right before the game started inside Kauffman Stadium's sports bar, Rivals. Paul is doing the pre and postgame show for Fox Sports Kansas City this year and I was able to get this card signed after the pregame show that is filmed in the bar.

In the past, Paul has always been the color man on the TV broadcasts. But last year, Paul came down with a serious throat infection that left him unable to broadcast for the year. He finally came back in September and helped out with the pregame show. It looks like that is going to be his role this year as well.

Amazingly, this is only the second signed card by Paul that I have. He usually performs the color man role for Big 12 basketball games, so he doesn't make it to Fanfest or any of the caravan tours. The last time I got a signature from him was in 2006 at Tropicana Field. That signature was on a ball. Here is the other card that I have signed and I got it at the Turkey Bowl in 2003. That was posted in the first few weeks of this blog.

For an older player, it is hard to read Paul's signature. It seems that most of the guys from that era have legible signatures (Tom Brookens excluded).