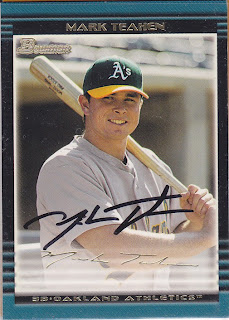 Most of my Mark Teahen autographs are on Royals cards. So, when I saw this card on checkoutmycards.com, I knew I had to have it.

That was a year ago, while Mark was still a Royal. I got this card signed last May at a Royals game after they finished up their BP. Mark was one of the best signers on the Royals and he signed all three cards for me. The other two cards I got signed were some newer 2009 cards and Mark said "ooh, some new cards I haven't seen yet". It's always cool to show a player some cards of him that he hasn't seen. I'm guessing that this card wasn't one of them.

In 2006, Mark was the Opening Day thrid basemen for the Royals. He got off to a poor start and eventually found his way to Omaha for a stint. When he got called back up, he went on a tear and ended up with 18 home runs and 69 RBI, both career highs (in only 109 games as well). The next season, he only hit 7 homers and all the Royals fans were trying to figure out who Mark Teahen was. Was he the 18 homer guy or the 7 homer guy? Well, we eventually found that he is good for about a dozen a year and may even hit an occasional inside the parker.

Mark is now with the White Sox and, despite the low average (.227), he is off to a good start. He has more walks than hits and most of his hits have been for extra bases. I know it's early, but he has an OBP of .414 and an OPS of .914. Not bad for the nine-hole hitter.

When I think of Bowman, I usually think of black borders. I thought that way about this set as well until I looked closer at them. The corners on these cards are teal. While the borders are mostly black, I think that the teal corners are a nice touch. That way, when a corner gets dinged up, it's not as noticable as it would be with black corners. Just thought I would throw that out there. I haven't seen this year's Bowman yet, but it would be nice if they aren't as black as they have been.
at 11:24 AM