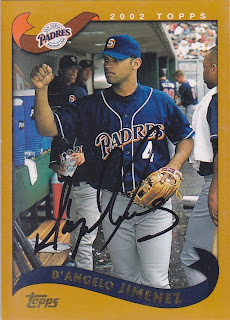 Here is the final '02 Topps Padrograph and it is of D'Angelo Jimenez. Jimenez played for eight seasons with the Yankees, Padres, White Sox, Reds, Rangers, A's, and Nationals. He was basically a utitlity infielder (that doesn't look right, but an utility infielder doesn't sound right) with the exception of his 2004 season with the Reds. That year, he played in 152 games which was almost twice as many as he has played in before or since. He hit .270 that year with 12 home runs, 67 RBI, and a .990 fielding percentage at second base.

2007 was the last year he spent in the Majors. He did play last year, however, and he split his time between the Mexican League and the Newark Bears of the Atlantic League. I'm not sure if he is playing this year or not.
at 9:23 PM