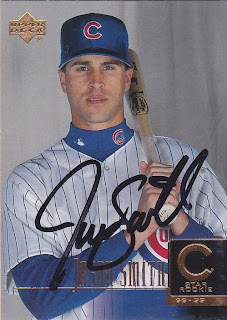 Here is a card that I got signed during the 2008 season. I was able to get it signed a few hours before the ballpark opened while I was hanging around the Royals team parking lot. It was the only card of Jason that I had at the time, so I was glad that I got it signed. Jason carpooled with a couple of other players (Mike Aviles maybe). I already had sigs from the other two guys, so Jason was the one that I was after and it turned out OK. Amazingly, this is one of two cards from 2001 that I got out of a pack and then got signed. The rest of the 2001s were either given to me or purchased to get signed.

Jason is a journeyman utility player that can play anywhere in the infield. He has played at least part of a season in the Majors every year since 2001. He has played for the Cubs, D-Rays, Tigers, Rockies, Blue Jays, D-Backs, Royals, and Astros. He's a .212 career hitter that has 17 home runs. The official minor league website currently lists him as a free agent.
at 2:27 PM