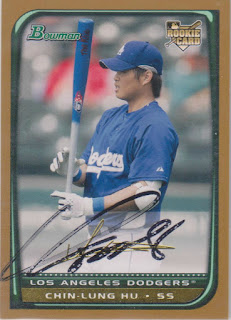 Here is a card that I got signed at an Oklahoma Redhawks game in 2008. The Redhawks were hosting a Mickey Mantle bobblehead giveaway, so I rounded up a group to make the four hour trip to OKC. The Las Vegas 51s were the visiting team and they were the team I focused on 'graphing that day. The 51s were affiliated with the Dodgers at the time and that is how I got this card signed. Interestingly, the Dodgers affiliate is now Oklahoma City.

I was excited to get a couple of cards signed by Hu at the time. But, Major League baseball never panned out for him. He played bits of five seasons in the Majors with the Dodgers and Mets and he hit just .176 over 193 at-bats. He did okay in his first call-up with the Dodgers in 2007, hitting .241 with two dingers 29 at-bats. Those were the only home runs he would ever hit as a Major Leaguer. Things went downhill from there. By his last appearance in the Majors, with the Mets in 2011, Hu went 1-20 with 11 strikeouts. He would spend the next season in the Atlantic League before calling it quits.

In 2006, I went to a Jacksonville Suns game (who were the Dodgers AA affiliate at the time) and I remember seeing some interesting tee-shirts at the gift shop. They read "Hu's on second". I almost bought one.