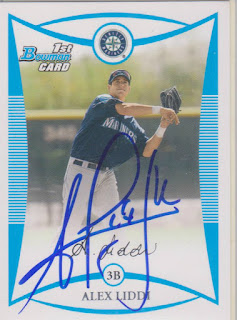 Here is a card that I got signed by Alex Liddi at the Futures Game in St. Louis in 2009. If you are unfamiliar with Alex, he does have a claim to fame. He is the first born and raised Italian to play in the Major Leagues.

It was cool having an Italian in the Futures Game that year. The Futures Game pits the USA against the World, but the World mainly consist of Puerto Ricans, Dominicans, a couple of Asians, and the token Canadian. It was cool to have a European in the game just to help give it a real worldwide feel.

Alex played in 61 Major League games with the Mariners from 2011-2013. Over that time, he hit .208 with 6 home runs and 16 RBI. Even though he hasn't played in the big leagues for five years, he is still playing baseball. He spent this past season playing AA ball in the Royals organization. It was a rough year for him as he hit just .247. But, he did jack 23 home runs and drove in 72. Considering he was playing AA last year at the age of 29, five years removed from the Major Leagues, one has to wonder how much he has left in the tank. It looks like he wants to keep playing, though, as he is currently playing in the Mexican Winter League.