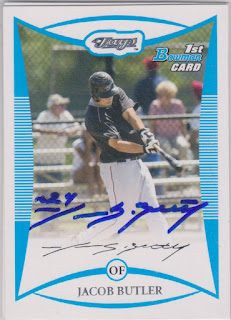 Here comes the first of many of the prospect and draft pick cards from 2008 Bowman. Most of these guys will be career minor leaguers, but there will be a small handful that did at least appear in a Major League game. Jacob Butler is not one of those guys.

I got this card signed at a Wingnuts game in 2009 while Jacob was with the St. Paul Saints. How is that for some bad luck? He does good enough in 2007 to get a card in the 2008 Bowman set, only to find himself in an independent league in 2009. Nonetheless, Jacob was a cool dude and very talkative.

Prior to meeting him, I wondered if the facsimile signature on his card might have been mistakenly taken from another player and put on his card. If Topps put the wrong picture on Brian Bannister's card, it is possible they could have put the wrong sig on a card, too. Besides, look at that signature. In now way, shape, or form does that look like Jacob Butler. So, before he signs this card, I ask him if they got the wrong signature on the card and he tells me that that is his sig. I was surprised and asked him why it looks like it ends with a "y". He said, "well, that's uh, uh, uh I'm not really sure what that is" and then slaps down a nearly identical signature on the card.

In 2007, Jacob had a full season in high-A in the Florida State League. Like I said, he did good enough to warrant this card, hitting .273 with 23 homers and 85 RBI. He got moved up to AA the next season and his numbers fell to .242, 16, and 64. He was just 25 years old at the time and the Jays cut him loose after the season. He played two seasons of independent ball before calling it a career.

I was looking at all the places that I got cards signed for this set and I probably got them signed in over a dozen ballparks across ten states. So, I made a map for this set showing all the places I got a card signed. Yesterday's card was signed in Oklahoma City and this one was in Wichita. I will update the map whenever I add a new place. 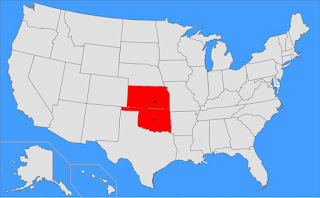