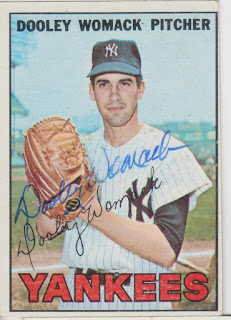 I first heard about Dooley Womack when I read Jim Bouton's "Ball Four". It was just such an intriguing name and it always stuck with me. Even though I read "Ball Four" about ten years ago, I still assume Dooley spent a lot of time with Jim as a Seattle Pilot. Turns out that was not the case. Dooley was traded to the Pilots for Jim late in the season. Based on that bit of info, I would assume that Dooley had a very minuscule role in the book. Nevertheless, he is still the only other player I can think of from "Ball Four" and that is because of his interesting name.

I mailed this card to Dooley in late 2012 and I had it back ten days later.

Womack was Bouton's teammate with the Yankees for several seasons.