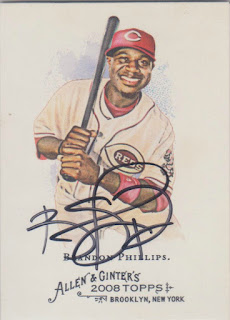 Here is a card that I got signed through the mail back when Brandon Phillips signed through the mail. At one point, he was a pretty reliable TTM signer. But, he hasn't signed anything TTM since 2009, which just happens to be the year I sent this to him. I sent it to him during Spring Training and I got it back just as the season was starting. I sent along an Indians card with this one, but that one did not make it home. I am not sure which card I sent him, but there is no way it would have came back looking as good as this Allen & Ginter.

Brandon played in nine Major League games last year with the Red Sox and hit just .130 in his limited action. Considering that he will be turning 38 this summer, I think the chances of him getting picked up by a team are slim. But, you never know.

If, in fact, he is done playing, he had a good career. Spending parts of seventeen seasons in the Majors with the Indians, Reds, Braves, Angels, and Sox, Brandon was a .275 hitter with 2,029 hits, 211 home runs, and 951 RBI. He was a three time All Star that snagged four Gold Glove awards and a Silver Slugger. He had double digit home runs in eleven seasons and he even reached the 100 RBI plateau once.
at 7:01 AM