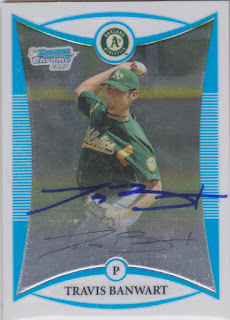 Here is a card that I got signed in Tulsa, Oklahoma in 2010. Travis was pitching for the visiting Midland Rock Hounds that season and he had that night off. So he and Anthony Capra were charged with charting pitches in the stands for that game and he was nice enough to sign for me from the seats.

That is one of the fun things about minor league baseball. You can always find a pitcher or two in the stands. The hard part is identifying them without a uniform on. But if you can, they are usually pretty good about signing. Danny Duffy made me wait until after the game to sign for me once, but all the others signed when I asked. Just make sure to go up to them between innings so you are not distracting them.

Travis, a fellow Kansas, never made it to the Majors. He made it to AAA in 2011, but stalled out there. After three and a half seasons of AAA, he took off for Korea and pitched there for two and a half seasons. He came back in 2017 for one more year of AAA ball before ending up on his hometown Wichita Wingnuts last season.

After the Wingnuts were forced to disband after this past season, it seems like many of the players, including their manager, have ended up on the Cleburne Railroaders. Travis was on their roster, but it looks like he decided to take his game to Mexico next season. He is now signed with the Pericos de Puebla.
at 11:39 PM