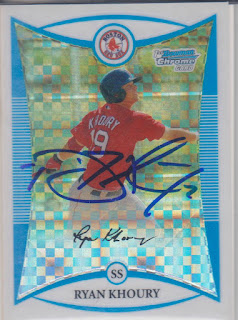 Here is a card that I got signed at a Wichita Wingnuts game in 2012. This is the only mainstream card of Ryan that was made, so I went ahead and got the x-fractor version to get signed. I think I got a regular version of the card signed, too, but that card was given away at some point.

Ryan has a stylish autograph, but this one is lacking a bit. At Lawrence-Dumont Stadium, the clubhouses are in left field. So, whenever players take the field, they usually come out carrying their bat, helmet, and glove. When Ryan signed this card, he was holding all that stuff in one hand while I held my card book for him to sign with his free hand. It still came out looking good, though.

Ryan played in the Red Sox system for six seasons, seeing action in AAA three different times. Over those six years, he was a .246 hitter with 24 home runs. He got released by the Sox during the 2011 season and caught on with a team in the Frontier League to finish the season. He then came to Wichita in 2012 and spent three years on the squad.

Ryan hit about .250 during his first two years in Wichita before breaking out in 2014. He had a career year that season, hitting .315 with 11 homers and 61 RBI en route to Wichita's lone American Association title. Ryan retired after that season.
at 3:11 AM