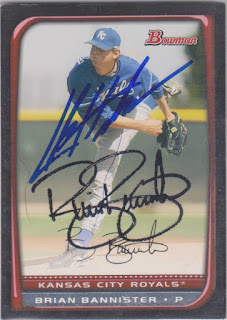 I know I said in yesterday's post that I was only going to be posting cards of players once. If I had more cards after that, they were going to get lumped into a group post like the one I did yesterday. I guess I lied, because I have posted multiple cards of Brian Bannister. In fact, I once quit blogging for about forty-five days because I did not want to do another Brian Bannister post. But, I thought that this card was pretty neat and I had to show it off in its own post. For the record, I did skip Billy Butler to get to this card.

Anyways, one year at Royals Fanfest, I was in line next to an older kid and he did not have a card of the player that was currently signing at that line. I had extras, so we made a trade. He gave me his stack to look through and I found this card, which I had not seen before. I instantly noticed it was an error because it says Brian Bannister and has his facsimile signature and stats on it, but it has a picture of Luke Hochevar. So, I traded for this card, but wasn't really sure what I was going to do with it.

About a week later, the Royals Caravan rolled through my town and Bannister was one of the guys on my leg of the tour. I took this card with me even though I was unsure if Brian would sign it for me. When I got up to him, I asked him if he would sign the card even though he isn't pictured on it. He was like "oh sure, I have a few error cards out there". Then, once I had Brian on the card, I knew I had to get Hochevar on it.

Fast-forward two years later and I am again at Royals Fanfest and I am in Hochevar's line. I get up to him and I show him the card and tell him that I was hoping he would be able to sign it for me. He just sat and stared at it a few seconds and was speechless. I take it that he had never seen the card, let alone signed one. He finally came to and signed it and was even curious when I had got Brian to sign it.

So, here it is- my only dual signed card with one player pictured on it. While it is not the coolest card in my collection, it is definitely unique.
at 6:44 AM