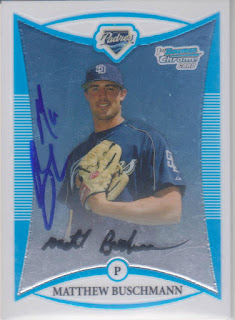 Here is a card that was given to me from Rod, of Padrographs fame. I am not sure how he has gotten so many of these, but he has given me three signed versions of this card. I have this one chrome card and then two of the non-chrome cards that are signed.

Matt pitched in the Majors for just a cup of coffee. He made it in 2016 with the Diamondbacks and got into three games for 4.1 innings of work. In those three games, he had no record with an ERA of 2.08 and three strikeouts.

Matt pitched a scoreless inning in each of his first two appearances. In his third and final appearance, he entered the game in the second inning after Shelby Miller walked in a run with the bases loaded. Down 2-0 with the bases full, Matt struck out Wil Myers to end the side. He then got his lone plate appearance to lead off the third inning, where he grounded out to short. To open the bottom of the third, he gave up a solo home run to Matt Kemp before getting the next three batters to ground out to third. In the fourth, he got a flyout to center before striking out the next two batters. He was then pinch hit for in the fifth and that was the end of his Major League career.

On paper, it seems like Matt did well in his limited big league action. I assumed these were all September appearances after the rosters opened up, but they were actually April games. More than likely, Arizona added him to the roster as an extra bullpen arm to start the season since there is usually an extra day off during the first week. Once a fifth starter was needed, back to the minors Matt went.

That was Matt's last season playing ball.
at 2:49 AM