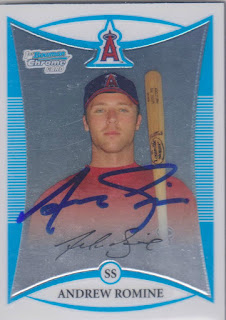 In 2011, a work colleague and myself decided to make a mini ballpark roadtrip. That trip consisted of all of two ballparks- Sox Stadium in Amarillo, Texas and Security Service Field in Colorado Springs, Colorado. Neither park was very memorable, but I definitely liked the one in Amarillo better. Even though it was kind of a dump, it looked and felt its age which is exactly why I wanted to go there.

Amarillo was in the American Association at the time, so there wasn't too much 'graphing to be done there. Colorado Springs, on the other hand, was still in the Pacific Coast League, so that was were the action was at on that trip. Since each team came out onto the field by their respective dugouts, you can really only 'graph one side or the other there. So, I hit up the home side and made my buddy work the visitor side for me. The visitors that day happened to be the Salt Lake City Bees and this is one of the cards my friend got signed for me.

Over the years, Andrew has had the chance (or misfortune) to pitch in seven Major League games. Over those games, he has logged 5.2 innings with a 12.71 ERA, 3 homers, 5 walks, and a strikeout. The unfortunate soul that struck out- Kurt Suzuki.

It appears that Andrew is going to try his luck in the National League this year. He is a non-roster invite of the Phillies. 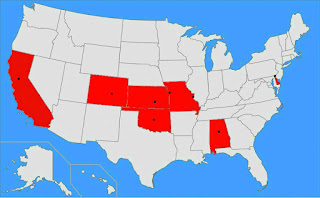