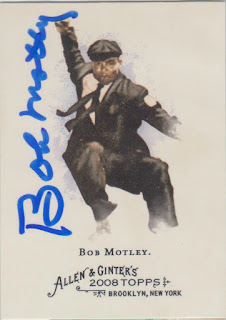 Here is a card that I got signed at All Star Game Fanfest when it was held in Kansas City in 2012. It features Negro League umpire, Bob Motley.

Bob umped in the Negro Leagues for a dozen years, where he shared the field with legends like Hank Aaron, Satchel Paige, and Willie Mays. After baseball integrated, Bob tried working his way into the Majors Leagues, but never got higher than AAA. In 1979, he did get the call to come work in the Majors during an umpire strike. But, he was unwilling to cross the picket line in order to reach his dream.

Prior to his umpiring career, Bob was a Marine in World War II. He saw action on Okinawa and received a Purple Heart after getting shot in the foot. Bob was recovering from his wound when he started umpiring softball games near the hospital grounds.

Sadly, Bob passed away just over two years ago. He was the last living Negro League umpire. About two months after that, the Negro League Museum in Kansas City unveiled a bronze statue of him.
at 6:47 AM

That's a great card and signature. Really cool that Topps made a card of him. Happy New Year to you! I'm looking forward to seeing what you post this year.

Thanks, Dan, and Happy New Year to you!

Cool signature and story of his