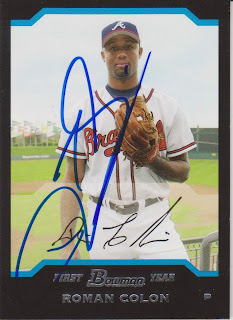 Here is a card that I got signed in 2012 in Oklahoma City. I was bored on a day off, so I went down to OKC since that was the closest pro ballgame being played. The Redhawks were hosting the Omaha Storm Chasers and we spent the entire time 'graphing the Chasers side since they are the Royals' AAA affiliate.

Roman was playing for the Chasers at the time and it was a struggle to get this card signed. He was practically standing right next to me when I asked him to sign and he told me that he would not since he got me the day before outside of the park. Since I wasn't even in Oklahoma the day before, I told him that he must have mistaken me for someone else. He was pretty sure it was me, but after some back and forth from me and my future wife, he finally came over and signed my two cards.

There is nothing like having to beg for an auto from Roman Colon.
at 9:28 AM