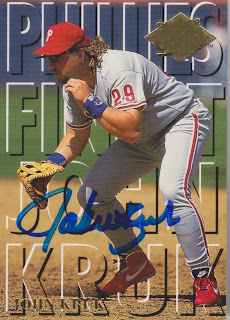 Here is the last card for some time that John Kruk signed for me this summer. John was at the College World Series with ESPN and he was nice enough to do two free autograph signings during the opening weekend of Fanfest. I made my way through each line once and I must say that John was one of the most talkative guys I have seen at CWS Fanfest. It really was a pleasure to get to meet him.

This card certainly fits the bill of one of my more fun cards that I got signed this summer (right along with his Collector's Choice checklist card). If you have never seen one of these cards before, it might be because you are not a Phillies fan. The Phillies Finest insert set was a small one dedicated to two players with bad haircuts- John Kruk and Darren Daulton. The set included twenty-four cards, twelve of each player. There were ten cards in each series and four cards were available as a wrapper redemption. Fleer even included 1000 signed cards by each player. Pretty rad, huh?

The back of each card chronicles the career of each player. This one talks about what lead to John being dealt to Philadelphia.

I am pretty sure that I had that exact same pair of cleats that John is wearing, but in black. They just don't make them like they used to.
at 10:19 PM