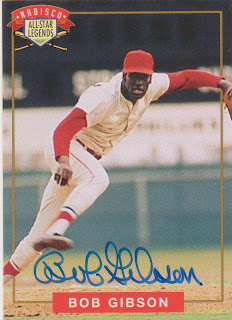 Check out this beauty. You will never believe how I got this card. One day, I got a random email inquiring about a 1996 Fleer Andres Galarraga autograph that I had posted. The person was collecting a signed set of '96 Fleer and was still needing the Big Cat. Since the card was just given to me, I didn't have any real attachment to it, so it was available. The person sent me a short list of cards that were available for trade and this one was on there. By that point, it was a no-brainer and I was all in on the deal.

I have nothing at all against Andres Galarraga, but he is no Bob Gibson.

Besides the awesome fact that I have a Bob Gibson autograph now, I know nothing about this set. I thought that there were just four cards in the set- Duke Snider, Jim Palmer, and Frank Robinson. But, when I do an image search, I keep finding other players like Jim Wynn, Bill Mazeroski, Al Oliver, Tug McGraw, and Sparky Lyle. There is so little information out there about this set that the best I could find was from Dodgers Blue Heaven. In a post about the Snider card, Ernest says that there was about 5,000 cards signed and they could be obtained by mailing in a proof of purchase and five bucks. What a deal. How did I miss this promotion?

Bob was an eight time All Star with two Cy Young Awards and an MVP. He was elected into the Hall of Fame in 1981.

I have seen two statues of Bob at ballparks. The first one was in St. Louis at Busch Stadium. He is one of the many mini statues there. This pic was from a game I attended in 2007. 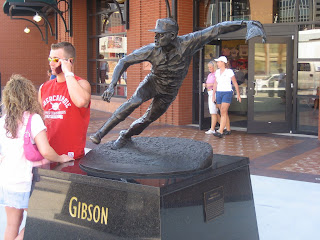 The second statue is located outside of Werner Park, home of the Omaha Storm Chasers. Bob is an Omaha native and they honored him with a statue at the park. This picture was taken last year when we stopped by the park to get a Chasers team set before seeing them play in Des Moines the next day. I have no idea why it came out as bad as it did (the picture, not the statue). 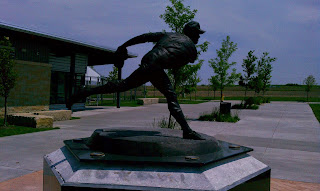 I did a little digging into that Nabisco set on my 1982 Topps Blog when talking about Jim Palmer. The link is here:
http://1982topps.blogspot.com/2014/07/card-81-jim-palmer-in-action.html

90,000 cards? That is insane! Thanks for shedding some light on the set for me.