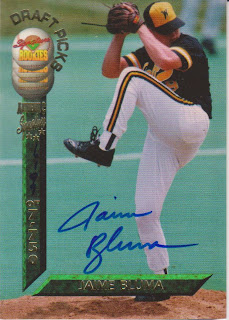 I mentioned a couple of posts ago that I like to pick up autographed cards every time I make a purchase from Check Out My Cards. That is how I got this card. I picked it up almost two years ago for just $0.99.

Most people would not think much about a certified auto of Jamie Bluma that costs less than a buck. But I picked this card up for two reasons. The first is that Jamie is a former Royal. But, the main reason is because he is pictured on the card in his Wichita State uniform.

When I was growing up in the late '80s and early '90s, there was probably more talk in the spring about Wichita State baseball than Royals baseball. The program was in its heyday and they really were the talk of the state, at least for baseball fans. They made the College World Series six times in a nine year span and won it all in 1989, while finishing runner-up twice. Even though the program has almost dropped off of the map since 2008, I still support them, even though my alma mater Kansas State program has really stepped up its game.

I met Jamie at Fanfest this year and I gave my kid an unsigned version of this card to get signed. Jamie just laughed when he saw it and commented that he has signed about 8,000 of these cards. I asked him how long it took him to sign the cards for Signature Rookies and he said that it took him several weeks to do it.
at 9:18 PM

I was a big fan of this set.