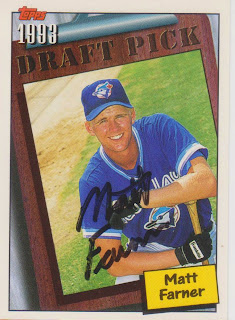 This is a card that was sent to me by Ryan, from The Great Orioles Autograph Project. He sent me a bunch of signed cards a couple of years ago and this was in the stack. I'm not really sure how Ryan got this card signed. But, if I had to guess, I would say that he got it signed while Matt was with the Hagerstown Suns in 1996.

Matt had a very brief career. He was taken in the supplemental portion of the first round of the 1993 draft out of a high school in Pennsylvania. He spent his first three seasons in rookie ball, split between the Gulf Coast League and the Pioneer League. He did fairly well in his one season in the Pioneer League, hitting .275 with 2 home runs and 24 RBI in 45 games. He got bumped up to A ball in 1996 and played just 11 games with Hagerstwon. In those games, he hit .154 with an extra base hit and 3 RBI.

And that was the end of Matt's career. In four seasons, he played in 93 games and hit .232. I think that we are going to have to chalk this draft pick up as a bust. I guess that is why Topps saves the draft picks now for their Bowman set now. At least we don't have to worry about any more borders that include a clipboard.
at 9:43 AM

I have that same card signed.