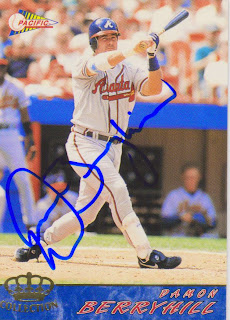 Here is a card that I got signed at Spring Training this past spring. Damon is the manager of the Dodgers AAA team in Albuquerque and he was nice enough to sign three cards for me as the Dodger minor leaugers worked out. He was not too happy, though, to see this card. He told me that he hated this card. I commented that it wasn't the best swing ever and he replied that it was a "shit swing". At least he is honest. I only grabbed it because it was the first card I came across with him as a Brave.

Damon spent ten seasons in the Major League, seeing time with the Cubs, Braves, Red Sox, Reds, and Giants. He spent a majority of his time with Chicago, but he did play two full years in Atlanta. He played in 100+ games those two seasons, the only two times that ever occurred. He hit .236 as a Brave and, with the increased playing time, set career marks with 10 home runs in 1992 and 43 RBI both seasons.

Damon played in all six games of the 1992 Fall Classic. In game one, he hit a three-run home run off of Jack Morris to give Atlanta a 3-1 victory. He would get just one more hit, though, over the rest of the series.

Damon's Albuquerque Isotopes finished the season 62-80. This was Damon's first season at the AAA level.
at 7:21 PM