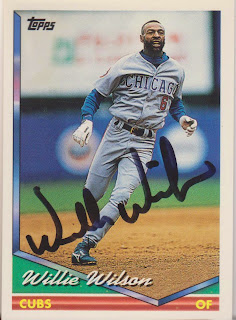 Here is the final card that I got Willie to sign for me at the Royals Caravan stop last year. He signed my '81 Donruss card and a random A's card for me, as well.

For his career, Willie played in the Majors for parts of 19 seasons. He was a .285 hitter with 41 home runs, 585 RBI, and 668 stolen bases. He was a two-time All Star and won one World Series. He won one batting title, lead the American League in singles four times, triples five times, and stolen bases, hits, and runs once. He is still the Royals all time leader in stolen bases and is listed by Baseball Reference as the fourth best Royal ever, based on WAR.

Speaking of Royals, did anyone notice that they are going to the playoffs for the first time since 1985? I am pretty excited. Hopefully they make it into the Division Series as I have tickets to game three.