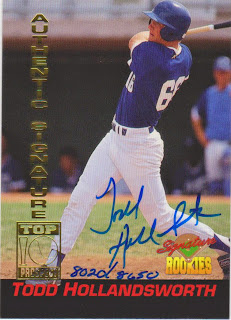 That was easily the longest title to a post on here ever.

Here is a card of Todd Hollandsworth that I picked up from Check Out My Cards. Just about any time I buy cards off of there, I always try to add an autograph or two before I checkout. On one summer day last year, I came across this card. Since this card was mass produced (8650 of them were signed), it was very cheap. It was so cheap that I could not pass it up. This card set me back all of sixty cents! Can you believe that? It is hard to find common cards on COMC for less than sixty cents sometimes.

Todd had a twelve year Major League career with the Dodgers, Rockies, Rangers, Marlins, Cubs, Braves, Indians, and Reds. Out of all those teams, I only remember him as a Dodger. But, I apparently saw him play a couple of times as a Rocky and Cub. The highlight for his career was winning the 1996 National League Rookie of the Year Award. Todd was the last Dodger to win the award and was the fifth of five straight ROYs that the Dodgers pumped out in the mid-90s. That season, he hit .291 with 12 home runs and 59 RBI. The RBI and home run marks were career highs for him.

After that breakout rookie campaign, Todd hit a slide. His average dropped to .247 the following season and he hit just 4 home runs. He turned into a part-time player after that and only saw action in 100+ games in one other season. That was with the Cubs and Braves in 2005.

I bought a few packs of this back in the day. Quite expensive for the time, I think like 6 bucks or something a pack. I never pulled any autos as "good" as Mr. Hollandsworth...which gives you an idea of why I didn't buy very many.

I missed out on this product, but I did buy a bunch of the Draft Pick packs. The prices were pretty steep, especially considering how cheaply you can buy the autographed cards today.