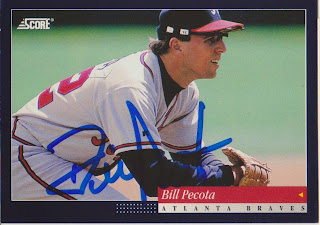 Here is my fifth and final Bill Pecota card from this year's Royals Fanfest. Prior to this year's event, I had one autograph from Bill and that was from a card show in the late '80s. I now have six cards signed, including a card from each team he played for- the Royals, Mets, and Braves.

Like I mentioned in the previous post of Bill as a Met, he was shipped to New York in the Bret Saberhagen trade. His tenure there, though, lasted just one season and he signed with the Braves as a free agent prior to the 1993 season.

He played with the Braves for his final two seasons. He played very sparingly in Atlanta, especially that first season. In that season, he played in 72 games. But, he had just 62 at-bats. He started just four games that season. He entered 33 games as a pinch hitter and 20 as a pinch runner. The final 15 games he must have entered as a defensive replacement. He did hit .323 in his limited work, though.

Bill did play for the Braves in the 1993 NLCS. He got into four games and was 1-3 with a run and a walk. The Braves lost all four games he appeared in.

Bill said that this was one of his favorite cards.
at 5:26 PM