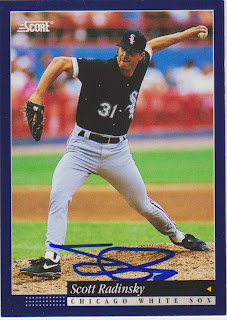 Here is a card that I got signed at Spring Training this year. Scott was the pitching coach for the Dodgers AA affiliate in Chattanooga this year and I was able to get this card signed at the Dodgers minor league practice. I would have got more cards signed, but this was the only one that I could find. I had gotten three cards signed by him in 2010, so he was not a high priority on the trip.

Scott pitched in the Majors for eleven seasons with four clubs- the White Sox, Dodgers, Cardinals, and Indians. He worked exclusively out of the bullpen throughout his career and he finished up 42-25 with 52 saves and a 3.44 ERA.

Scott has a rather short and abbreviated signature. And he always seems to sign cards in the exact same spot- the lower middle. It doesn't matter if the card is vertical like this one or his 1991 Topps, or horizontal like his '94 Collector's Choice.
at 11:00 PM

Scott Radinsky is awesome. Cancer survivor, owns a skate park, plays in a punk rock band. Oh yeah, played baseball in the majors. Pretty cool. Signature's not much to look at, but still cool.

I knew about the skate park, the band, and the ball playing, but I did not know the cancer survivor part. Thanks for sharing!