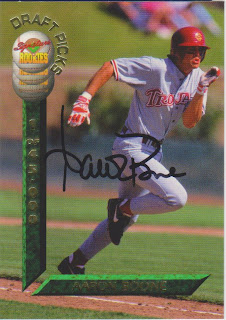 Here is a card that I got signed at the College World Series this summer. Aaron works for ESPN and he was in town to work the games. All State took advantage of him being there and had him at their booth signing autographs the day before the games started. His line went rather quick and I was able to get all three of my cards signed, and a few 8x10s, while I was standing in line for John Kruk.

I had a really hard time finding cards of Aaron to take to get signed. My card storage system is rather lacking. I need to spend some serious time getting my stuff together and sorted. I can find stuff for all of the current players and all of my cards pre-2004 are pretty well sorted. But, I have to do some major digging to find cards of any player that has retired in the past ten years.

That is how I came to get this card signed. It would not have been my first option, but I could not find anything better. I found this card, a minor league card, and an '08 Topps Heritage card. Do you know what team he is playing for on the Heritage card? The Astros. Do you know how long his career as an Astro lasted? Thirteen at-bats. I could not find a single Reds card of him, or even a Yankee or Indians card. I need to get my stuff together.

Even though this was not my first choice, I am still glad I got it signed. It was at the College World Series and it shows him playing for USC. The 8x10s they handed out also depicted him as a Trojan.
at 11:53 AM