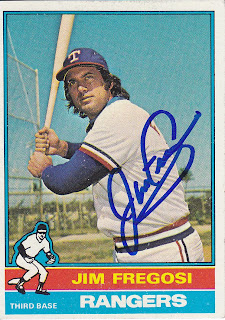 This is the second and final card that I got back from Jim when I wrote to him over a month ago. Jim reminds me of Ron Cey in the fact that he put his uniform number on the Angels card I sent him, but not on this card. The picture of him on this card is more like the Jim I remember from his manager cards than the picture of him on the Angles card.

I was going to send him his card from the '81 Donruss set that I seem to love getting signed. But, I had read that he signs in ballpoint pen and the Donruss card is really dark and he is wearing a dark blue warm-up jacket. So, it didn't look like a very good card to get signed in ballpoint. I sent this card instead and it came out looking good enough.

This is way off topic, but I thought that I would bring it up to lengthen this post. I do not like used stuff. I don't go to garage sales, pawn shops, or thrift stores. I like my stuff new, right out of the box. But, that is not the case with baseball cards. I don't care where they came from, especially the pre-1980 cards. This card is 33 years-old and I have no idea how many owners it has had. I have it. Jim Fregosi had it for a little while. I got it at the card shop who bought it off of some guy. Maybe that guy got this card in a trade from a guy that got it in a trade. Or maybe he just got it out of a wax pack of '76 Topps. Who knows? Either way, thank goodness for used cards.

Oh yeah, I know that I said I would do a couple of posts a day if they were repeat players. But I have been busy getting ready to go to a Lincoln Saltdogs game tonight. So, you are stuck with some repeats for now. I tried to make them a little more interesting than most of my repeats, though. Hopefully, I will have a 1950 Bowman on here tomorrow and then it will be back to the regular posting schedule.
at 11:36 AM

Nice Fregosi sig! Had to leave a comment about the 'used' things. I LOVE pawn shops. I have nearly 400 DVDs and almost 950 CDs, most of which were bought used.

My step-brother pawned some nice sets at a pawn shop once (I believe it was for beer money). Seems like they were some early '80s sets, maybe late '70s.

The Fregosi card is itself beautiful and his signature is perfect. Really nice.

That is a great signature over the white of the jersey.