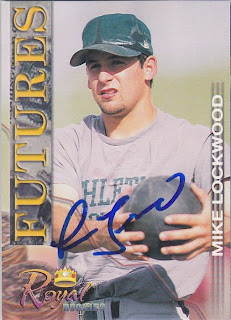 Here is another Royal Rookies from the binder of Paul, of Paul's Random Stuff. This one features former A's and Red Sox farmhand, Mike Lockwood.

Mike was drafted by the A's out of Ohio State in the 23rd round of the 1999 draft. Looking at his numbers from his first two professional seasons, he looks like one of Billy Bean's prototypical Moneyball picks. In his first season, he posted an OPB of .451 in low A ball. He moved up to high A in his second season and his OBP was .463. After just 47 games of high A ball, he got bumped up to AA. There, he hit .309, but his OBP dropped to .377. But after 56 games at the AA level, he got promoted to AAA (all of this in his second season). He got into 36 games there and hit .254 with a .340 OBP.

Then after a fast ascent to AAA, he spent the next two seasons playing AA. He hit .260 and .242 there with an OBP around .330 each season. He started out in AA again in 2003, but he hit good enough to move up to AAA again. He started out the '04 season in AAA and was struggling at the plate before the A's traded him to the Red Sox. The Sox sent him down to AA for the rest of the year. In 2005, he spent the whole season on the Sox AAA team and he hit .229. That was his last season in affiliated ball.

After that, he went to the Atlantic League and played for the Somerset Patriots. He played for them for three years and finally retired after the 2008 season. It seems like Paul sends me quite a few cards from players that played for Somerset. They must either have some of the best talent in the league (ie, guys who have cards) or are some of the best signers.

Mike has a unique signature. I cannot make out a single letter in it except for an "R" and an "S"?

Also, I like how Royal Rookies airbrushed his hat and still had the integrity to leave all of the sweat stains untouched. That's a good-looking hat!
at 7:01 PM

I had season tickets for Somerset for four years. Every Sunday home game, they had most of the team participate in a pre-game autograph session. As a result, I ended up with a lot of signed cards from their players.