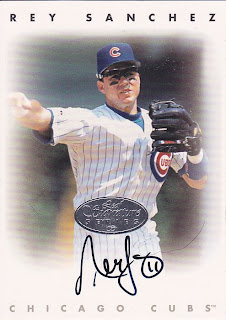 Here is yet another checkoutmycards purchase. This one set me back one dollar. I bought this card because Rey was the Royals starting shortstop when I started following them in 2000. He wasn't much of a signer at the ballpark and I am pretty sure that this is the only autograph that I have from him.

Rey had a long career with a few different teams. He broke in with the Cubs in 1991 and played for them until they traded him to the Yankees in 1997. He signed with the Giants in 1998 and the Royals in 1999. He stuck around in Kansas City until they traded him to the Braves in 2001. Then from 2002 to 2005, he bounced around to the Red Sox, Mets, Mariners, Devil Rays, and Yankees. He finished his career as a .272 hitter and a .983 fielding percentage. That is not too bad for a shortstop.

I remember when Rey first came up with the Cubs and Harry Caray would call him "Rey Sancheez". I miss Harry.

Rey's signature looks like it says Nerf.
at 9:57 PM

You're right -- it does look like "Nerf". I'll never look at Rey Sanchez's signature the same way again. :)

Yours is a little bit cleaner that the autograph I got through the mail a couple of years ago, so that might be why you saw "Nerf" and I saw scribble.

You and I must be on the same page these days - I picked up a few autos off of checkoutmycards for dirt cheap too. I'm sure I'll post them someday... and maybe write something about them. maybe. haha.

Nice card, and very good call on the Nerf auto. I always think it's interesting to hear who is a good signer and who isn't.