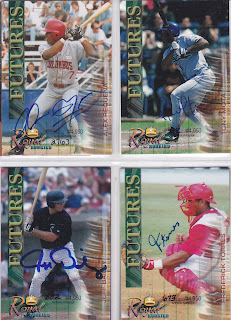 Here are some cards that I had never heard of until a couple of years ago. I got all four of these cards in Wal-Mart repack boxes. I got two of them in packs and the other two were the special bonus item in the boxes. I had never heard of any of the players, so let's see what we have here.

Alex Requena was an undrafted free agent signed by the Indians. He played in the minors for nine seasons for the Indian, Dodger, and Giant organizations. He never made it above AA, though. His last season was 2007.

Tony Mota was a 17th round selection by the Doddgers that looked like he was on the fast track to the Majors. He was in AA by the end of his third year and had made it to AAA a year and a half later. He then spent three seasons at that level before bouncing around independent teams and lower level affiliated teams. His last season was 2006. The card of him appears to be an error card. It is a reverse negative.

Jeff Bailey was a second round draft pick by the Marlins in 1997. He played for the Marlins organization for five seasons before being dealt to the Expos. In his three years in the Expos organization, he made it up to AAA. After that, he signed with the Red Sox and played in their system all the way up to last season. The difference between Jeff and the rest of the guys on here is that Jeff made his Major League debut in 2007. He played for Boston over parts of the last three seasons and is a .228 career hitter. He is a free agent at this time.

The final card is of a former Rangers undrafted free agent, Frederick Torres. Torres signed in 1996 and played in the Ranger system for five seasons, spending most of his time playing for Charlotte of the Florida State League. He retired after the 2002 season. However, he came out of retirement last year and played in 42 games with the Camden Riversharks of the Atlantic League. He only hit .236 for them, so it will be interesting to see if he plays this summer.

Well, I got one card of a player that made it to the Majors. I guess that is not too bad.
at 8:23 PM

Man, I get a weird feeling every time I see someone post those awful cards! Surprising that you got a card of someone who made it to the show, there weren't many... I worked for Royal Rookies and I am pretty sure that I took all of those photos...

Really? That's pretty cool. Just another reason to like these cards.

Royal Rookies are fun. Most of the guys playing indy ball have seen every card they have hundreds of times... but the Royal Rookies ones almost always get a reaction anyway. :)

I didn't realize that there were autographed insert version, though.

Paul, you can find a bunch of them (the autographs) for a dollar or less at checkoutmycards.com.

Wow, I think I saw more of those guys play in the Atlantic League than in the majors.

How cool that the Troll took those pics. The Bailey and Torres sigs look nice.

I believe I received a Miguel Cabrera autograph out of this same type of box, but I can't find any information about it. I posted a picture of it on beckett here: http://www.beckett.com/forums/thread-1539119.html