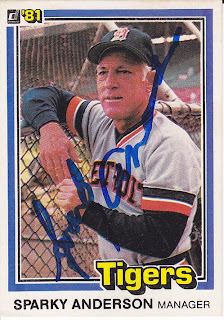 Here is a card that I got in the mail yesterday from Hall of Fame manager Sparky Anderson. Wow, two consecutive manager cards on here; that is a first. I sent this card to Sparky on the second and had it back in six days. I think that was a day or two quicker than Jim Fregosi.

I wrote to Sparky about a year and a half ago and got an '08 Goudey signed by him since I didn't have this card. I then saw reports that Sparky wasn't signing through the mail anymore. Because of that, I didn't even worry about getting this card signed since I didn't have it. But, I recently noticed that Sparky has been signing through the mail again, so I bought this card on my last checkoutmycards purchase. Despite the fact that Sparky looks like on old Oompa Loompa in this picture, I am still happy with the results.

One thing that I do like about the '81 Donruss manager cards is the stats on the back of the card. They list his record as a manager for every year they managed. Not only that, but they also include the manager's lifetime stats from his playing days. You will not find a modern card giving that much information on the back of a manager card.

Sparky was one of those "larger than life" managers when I was a kid. Nice pickup!