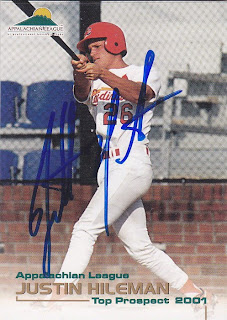 I'm pretty sure that this is the longest title I have had since I started this blog.

Here's a card that Paul, of Paul's Random Stuff, sent me last September. The coolest thing about it is the card itself. I have never been to an Appalachian League game before and as a result, I do not have any cards from he league. So, I thought that it was neat that I got my first card from the league and it was also signed.

As for Hileman, he didn't make it too far in baseball. He played for five seasons in the Cardinals system but never made it above high-A ball. After that, he played four and a half seasons of independent ball, mostly with the Lancaster Barnstormers of the Atlantic League. He did really good in the Atlantic League and his best season was in 2007 when he hit .287 with 17 homers and 82 RBI. His average drooped to .236 in 2008 and he retired after the season.

The Baseball Cube page for him lists his first name as Jutt and he appears to have signed this card that way as well. This is the first time that I have ever seen Justin shortened to Jutt.

Jutt is playing for the Johnson City Cardinals on this card. The JC Cards are still around today and are still affiliated with the St. Louis Cardinals. The team is located in Johnson City, Tennessee.
at 1:55 PM

For the first year or so he was in Lancaster, they still referred to him as "Justin" in the programs & on cards, but nobody seemed to call him that. They finally gave in and started referring to him as "Jutt" in print.